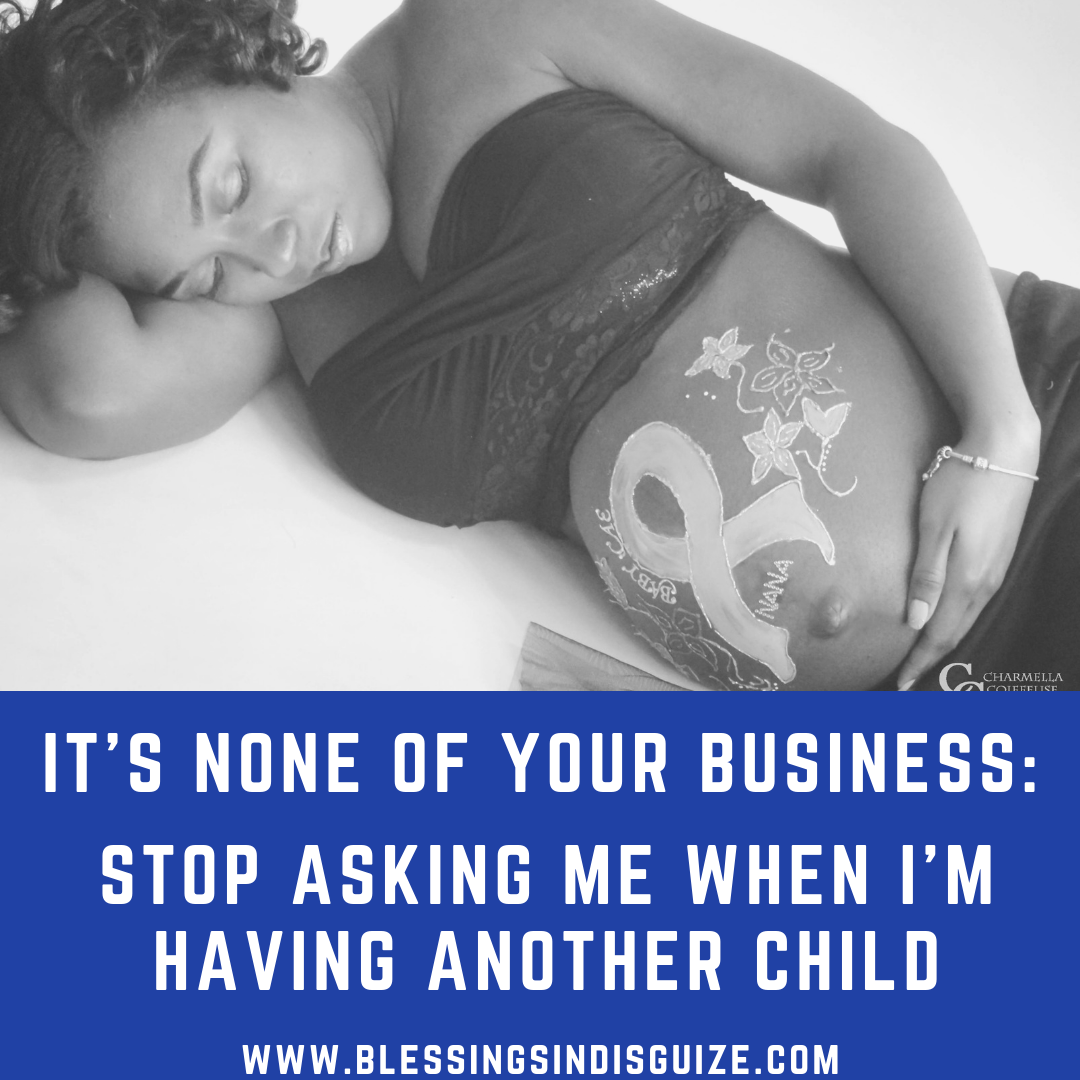 It’s None of Your Business: Stop Asking Me When I’m Having Another Kid

For those of you who don’t know, my youngest daughter is 3. And I’m almost certain that before the nurses had her completely cleaned off, someone had asked me if I was planning to have another child. I can’t even begin to count the number of times that I have been asked when were my husband and I going to try for a boy.

And while I’ve smiled through all the questions and laughed people off instead of telling them to mind their own business, inside I was becoming angry and angrier. While I looked great on the outside and people considered that I was still capable of having children, they really did know what I was going through.

No, I didn’t want them tied.

No, I didn’t want birth control.

No, I didn’t want to just use protection.

For me there was no other choice but to take away my ability to have children. And it hurts, deeply. Just like I’m sure it hurts for those women who have been told by doctors that they will never be able to have children whether it is because of a medical condition, some physical harm that was caused to them, or due to the fact that a miscarriage changed their body and took that ability away. The women who gave birth to only lose their children within minutes, days, or months of their birth. The women who were in the midst of preparing for the birth of their child and suddenly had to face the fact that their child had died inside of them.

It hurts. And many people think they’re being motivating or encouraging by asking when are you going to have a baby or when are you going to have another child when the fact is that you don’t know what that woman has been through or is even going through. Daily I struggle with and often regret the decision I made, but I made that decision and I must endure the consequences.

I Know What You Said, But That's Not What I Heard 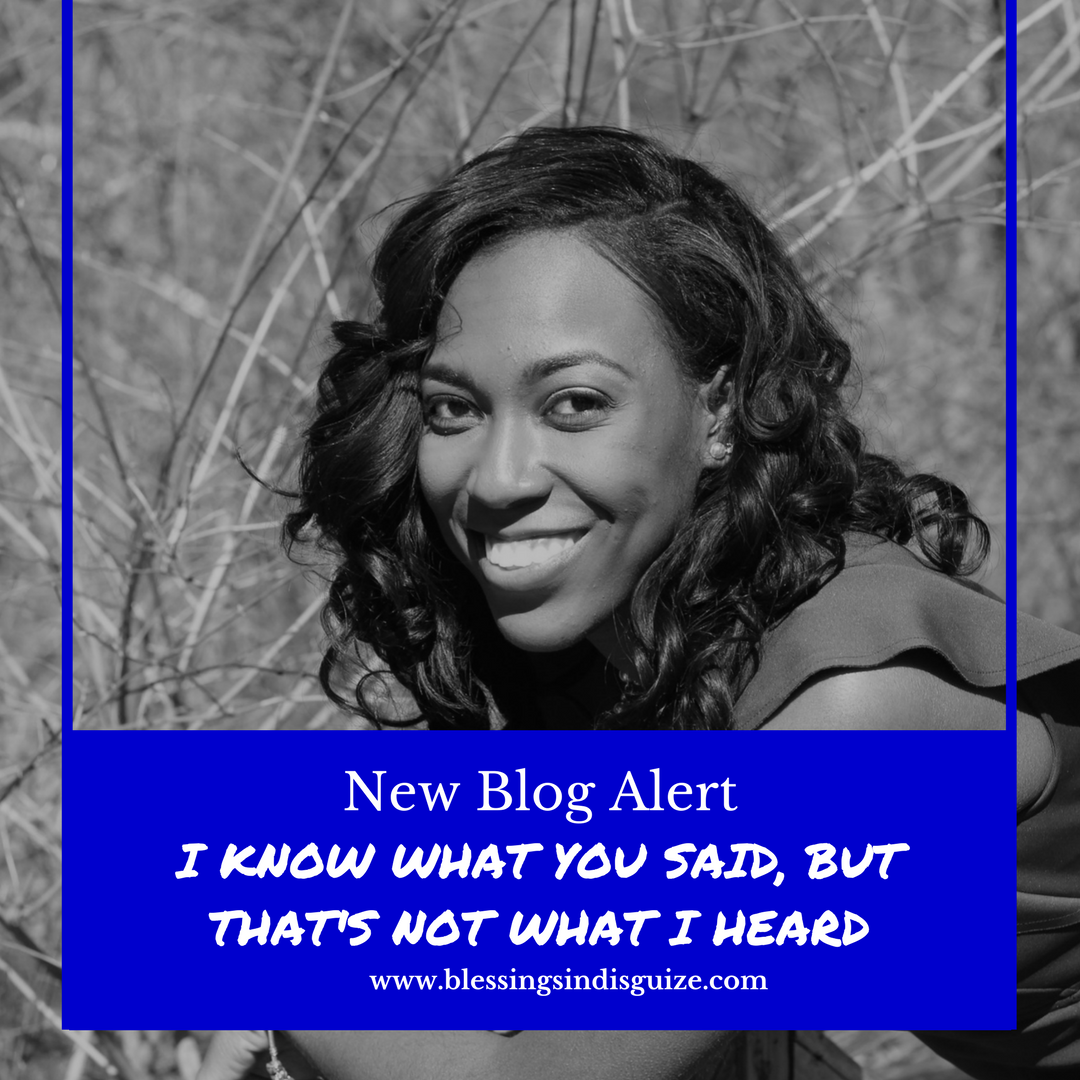 I Know What You Said, But That’s Not What I Heard

The words were like pulling the pin out of the grenade that set me off.  They were a trigger to set off the internal bomb of my emotions.

I could hear you talking but somehow the words that fell so effortlessly from your lips didn’t flow as easily through my ears.  They were painful.  And internally it set off a ball of emotions that took me back to a place I never wanted to be.

Like when you said to me, “You dropped the ball one too many times,” all I heard was “you’re unqualified” and “you’re not good enough.”  It told me that all the times I sacrificed and went above and beyond didn’t matter because in your eyes I was my mistakes and not my success.

At least that’s what I heard…

Or that time when you said to me, “you’ve just got to get over it,” all I heard was “your feelings don’t matter.”  You wanted me to walk in your shoes not realizing those weren’t meant to fit me, they were only meant to fit you.  So while “just get over it” was your coping mechanism, for me it just reaffirmed that my opinion wasn’t meant to be heard.

And I tried to just get past it but then there was the time when you said to me, “You just need some time but I’m sure you’ll go back,” all I heard was “You’re too weak to really stand by the decision you made.”  It was as if you were sent to shatter the little bit of confidence that I had and to keep me in the cycle of catering to the wants and needs of other people while leaving myself unfulfilled.

But I pressed past those words only to be hit with the time when you said to me, “I’m not really upset about what happened but it bothered the people I’m with so I had to say something,” but all I heard was, “I care more about these people’s feelings than I do about yours.”  It was something I should have been used to but those words stung a little bit more this time than they did other times.  Maybe because I never expected you to say them, maybe I felt like we were better than that, maybe it was a harsh reminder that I’ve always felt like other people’s opinions mattered more than mine.

But that's what I heard.

And I know some are reading this and saying, “Well Jasmine, you just misinterpreted what they were saying.  You can’t blame them.”

And I don’t.  Because when I look back, I now realize that their words were sent on divine assignment. To the deepest places of rejection, low self-esteem and confidence, the need to please others, and the lack of value and worth I had placed in myself.  I needed you to say those words because instead of sparking an emotional response, they started an emotional healing.  So even when I hear those words or something similar to them, I don’t bow down in fear, self-pity, and doubt, but I stand confidently in knowing who I am and whose I am.

I know what you said, but what I heard was, “Jasmine, you are who I say you are and not who others think you should be.”

I heard Him and His words were the only words that mattered.

The Aftermath of Valentine's Day: Is This As Good As It Gets 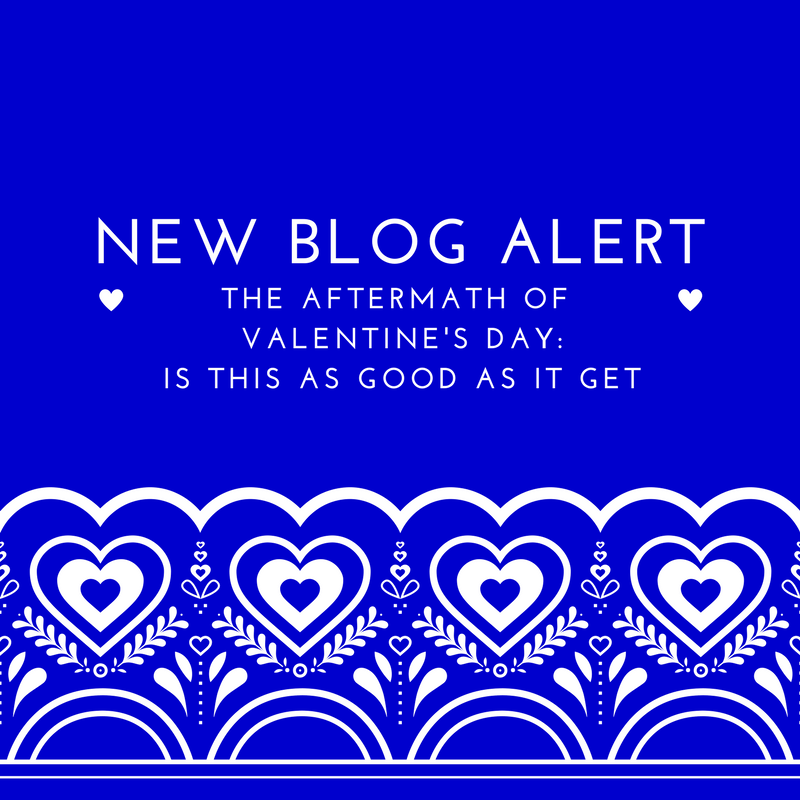 Holidays really aren’t my thing.  But out of all of them, I particularly hated Valentine’s Day.  I just never could really understand why I hated it so much.

Roses die and remind you how quickly the happy memories of the day fade.

Stuffed animals are only cute as long as you’re in a good place with the person that gave it to you.  Otherwise, it’s just an ugly reminder of what was.

Let me say it again, I hated Valentine’s Day.

But I didn’t know why.  That is, until I took a stroll down Valentine’s Memory Lane.

And there they were.  All the painful memories.

Like the year I was so sure I was spending the day with my forever Valentine.  I was in the midst of one of the toughest situations I had ever had to endure at that point in my life and I was sure that this night would help me forget all of the pain that I was feeling.  He vowed to make the day unforgettable and surely he kept his promise.  Candlelit dinner only to be outshined by the text messages that proved I wasn't the only Valentine he had spent his day with.

I rushed out of that memory and strolled a little further to the year where I thought Valentine’s Day would make up for all the hurt I had endured in the previous months with the guy I was in a relationship with at the time.  Steaks cooked just right, double date to the movies, and drinks with friends.  The night ended as “perfectly” as I thought it would, but the passion would only turn to pain when just a few days later I was hit with the reality that while I still being faithful to him after all the lying and the cheating, he was being faithful to his unfaithfulness he had already shown me in the months prior.  I was just temporarily blinded by the bears, gifts, and balloons.

I gathered my composure and decided to stroll along a little farther hoping to bump into a good memory.  Only to run smack into the memory of the cute bear I got sprayed with his Sean John cologne that I thought was the cutest gift in the world.  We weren’t able to see each other for very long that Valentine’s Day (or any other day for that matter) due to our busy schedules.   In our times away from each other, I could hug that bear and smell the scent of the cologne and feel close to him.  But the scent would fade and so would the good memories when you realize that you weren’t the only one cherishing that scent.

So there I was stopped dead in my tracks telling myself this is why I hate Valentine’s Day. Until I realized that it wasn’t any of their faults about my hate for Valentine’s Day.  One day on the calendar cannot erase the pain and lies that had occurred for months.  This one day on the calendar although marketed as a day of love cannot magically change someone’s heart or mind and make them into a perfectly loving human being.  This one day of gifts, flowers, cards, and balloons doesn’t balance out the loss endured from loving someone who wasn’t capable of loving you back.

I had settled for the thought that I shouldn’t celebrate Valentine’s Day because all I ever got from it was hurt and pain.  I had convinced myself that this was a good as it gets.

It didn’t take for me to have a good Valentine’s Day (or even a day or two after) to begin celebrating the day again.  It took for me to realize that I could not expect this one day to fix all of my relationship issues or my self-esteem issues.  It was seeing the worth in myself to know that I was too good to be treated the way that I was and to let me self-esteem be dependent upon this one day on the calendar.

It gets better when you love yourself. Not only on February 14th. But every day of the year.